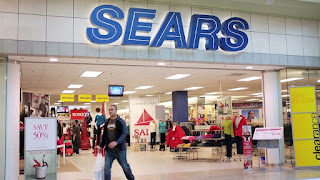 This week I was reading that Sears is going to go out of business.
This is a big deal for me.
My paternal grandfather was a Sears’ man.
In fact he met my grandmother while both of them were working at Sears.
My Dad worked at Sears for most of his career.
He bought a house, and sent three kids to school while working at Sears.
I still will go to Sears to buy things.
Not because I think Sears has awesome products or even great deals.
I do it mostly for nostalgia.
I like to go to Sears because it reminds me of my Dad.
Often times I would drop by Sears to visit him at work.
Being there reminds me of him, and connects me to my past.
I was sad to hear that it was going to die.
It got me thinking of how things die.

So, this morning we are going to talk about death.
It is not a subject that we like to talk about very much.
It is actually something that we try to avoid.
Most of our actions in life are dictated by trying to avoid death as long as possible.
I heard a hospital chaplain once say that everyone believes that they have at least five years left.
That we all know on a some level that we will die, but that we all believe that we have at least five years to live.
This is the reason people are always shocked to hear when they found out they are dying.
We just don’t like to think about it so we move it down the road.
It is unpleasant to think about.
What I want you to leave here today knowing is that death is not only unavoidable but that it is necessary.

Our Gospel this morning is a story about death and resurrection.
What stood out to me this time was that Jesus waited.
Jesus was told that a good friend of his was dying.
Instead of dropping whatever he was doing, and running to be with his friend, Jesus waited.
He waited two whole days.
By the time he arrives in Judea it has been four days.
The reason for this is partly particular for the telling of the story.
It was the Jewish belief that it was after 3 days that the soul leaves the body.
And Jesus wants to make sure that people know that Lazarus is really fully dead the miracle needed those four days.

The great thing about John’s Gospel is that it works on many levels.
And something else is being told to us.
That death is needed for there to be resurrection.
You can’t have one without the other.

I have seen it many times in Churches.
People want new things to happen.
They want people to come.
They want it to be like the old days.
But they are not willing to let things die.
And as long as we hold unto things there is no resurrection.

It happens in our lives too.
We want something new to happen, but we are not willing to let go of what we have been doing.
We are not willing to see things from a different angle or perspective.
So we hold on to things, and then we don’t understand why nothing changes.
It can’t change without death.
Only when something dies can we have resurrection.

I was once helping a couple through a difficult time in their marriage.
The wife had cheated on the husband and they were trying to decide if they were going to stay together.
I told them that they had to let their old marriage die, and let a new one begin.
They should renew their vows, because only when they let what once was die could resurrection happen.

If you have heard me preach before you know that I am against changing.
I don’t believe people change.
However, I do believe in death and resurrection.
It is the center of our faith.
Only through death do we get to resurrection.
The problem with the change model is that we want things to be different without the difficult work of going through death.
We say, “I will be a better person tomorrow”.
What we should be saying is, “what will I let die?”
What needs to die in me, so God can bring about resurrection?
Change is dependent on our ability to do something better.
Resurrection is based on God’s ability to bring something new out of death.

I was thinking about our prayer lives.
I hope in your prayer life that you are bold to ask God for what you need.
But don’t count out the power of a prayer not answered.
That through that unanswered prayer God is trying to let something die, so that there might be resurrection.
This is why prayer is an ongoing conversation because we don’t know the way that God will be working, or what God will work through in our lives.
We don’t know what God is willing to let die to bring about resurrection.

I want to give a note of caution.
I am not saying that death is easy, or that we should ignore it.
What is also wonderful about this story is that Jesus weeps.
Even though he knows what he will do, he still weeps.
Death is not and never will be easy.
I am not suggesting that God doesn’t care.
Of course God does, but maybe God knows something we don’t.
Maybe the present hardship is only to bring about God’s glory.
God will still cry with you as you go through the process.

I was recently praying that I could turn around the New Hampshire Council of Churches.
I have been the board president for about 6 years.
I thought that I could make this thing better.
But for the last 6 years we have less and less participation, money, and Spirit.
I was working really hard to find a way to make it better for 6 years.
It has been the most frustrating thing I have ever done in my 13 years of ministry.
I had threatened a couple of times to stop being the president.
I couldn’t let it go.
Finally I did.
I have to let it die.
Do you have things in your life like that?
Things you are frustrated with, but won’t let die?
I don’t know what God will do next.
I don’t know what will be resurrected in me, or in the NHCC.
That is the thing about death and resurrection is that it is not always obvious to us that it is happening.
We don’t always know the outcome until much later.
We are often Mary and Martha.
“Lord if you had only been here…”
We have trust that God is up to something not always understanding what it is.

Death is really awful.
We want to avoid it.
I wish that Sears could be there forever so I can go and feel that connection to my grandfather and Dad.
I wish that there would always be a NHCC that brought different Christians together to work for good things in the world.
But in order for God to bring resurrection certain things need to die.
So let us not fight it.
Let us see what God is up to as things in our lives die.
Let us wait to see what God will resurrect so that God’s glory is revealed.
Amen

Posted by Pastor Jonathan Hopkins at 5:54 AM No comments: