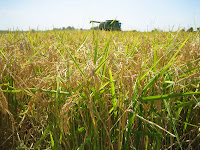 All of us at one time or another has wondered why God allows evil.
We have all questioned why bad things happen to good people.
Why does God allow evil people to hurt others?
Why does God allow evil people to make millions of dollars off innocent unsuspecting people?
Why does God allow evil people to kill without being punished?
This morning our Gospel lesson gives us some very interesting thoughts from a parable Jesus tells about seeds being planted.
In the parable Jesus is the one sowing good seeds, and the evil one sowing bad seeds.
What is amazing about the parable is that both good and evil grow together.
I am no expert farmer but I read this week that the kind of wheat and weeds that Jesus is talking about look very much alike.
And that the roots of the weeds and wheat would get tangled and caught up together.
This is the problem with evil people is that they look just like good people.
It is not until they act that we can see the difference and sometimes even then it is hard to tell.
The parable is really astonishing because the slaves, noticing that the weeds have infected the good wheat, want to pull out the weeds, but the householder will not allow it.
“No; for in gathering the weeds you would uproot the wheat along with them.”

All of us in order to feel safe, in order to make things right have in us the same tendency as the slaves in the parable.
We want to root out evil and do away with it.
For example, after 9/11 we all felt vulnerable and what made us feel better was hearing from the president that we were going to get the bad guys; we were going to, “smoke them out”.
This year when we heard that Osama Bin Laden was killed people danced in the street.
We love it when evil is defeated it makes us feel safe and good.

The problem is that in our attempts to root out evil we might just pull up the good wheat with it.
For the most part, it is hard to tell who is good and who is evil.
Perhaps what made people so upset about the Casey trial was they felt that justice was not served.
That this woman who many thought was guilty did not get what was coming to her.
Jesus is telling us this morning that we are to take the long view.
Jesus asks the slaves to see even beyond this time and place to a different season to see beyond today into God’s future.
To understand that in God’s time all things will be put right, but in the meantime it is not our job to figure out who is in and who is out.

Throughout history people have tried to rid the world of evil.
They have tried to get rid of what was not pure and good in their minds.
Often times this has lead to nothing but fear and hatred.
We have tried to define “the other” “those people” that are to blame for the world’s problems.
In the meantime we have destroyed our own moral compass.
Think of people who are against abortion and in pursuit of trying to rid the world of what they perceive as evil end up killing doctors who perform abortions, or bomb abortions clinics.
In trying to root out evil we might uproot the good including the good in ourselves.

So if it is not our job to uproot evil what is our job?
Are we suppose to let evil wreak havoc on us and the world?
Are we not supposed to stand up for what is right and good?
Yes but we do it always through love, not through trying to get rid of people we find undesirable.
Our job is to tend the garden.
Indiscriminately show the good news of Jesus Christ.
We are to help all people even if they are weeds.
The people that Jesus ministered to and hung out with where considered by many to be the weeds.
They were the ones who were destroying good family values.
They were the ones who were blight on the neighborhood.
And Jesus told us to love our neighbors, to pray for those that persecute us.
This morning he tells us to let the weeds and wheat grow together because in the end it will be God who judges.
It will be God who sorts through what is good and evil.
It will be God who in the end will make all things right and make us shine like the sun.

We also see in this in churches.
We don’t like someone so we want them to go away.
Or we don’t like the way things are going so we pull away and think it is better to let all “those people” do whatever they want.
We wrongly believe that if we only could get rid of the people that disagree with us everything would be fine.
Or if we just went to another church where everyone agrees with me then all will be well.
The truth is that even here among us there are moments when we are the wheat and moments when we are the weeds.
The beauty of being a member of a faith community is that we agree in a non verbal contract to hang in there with each other.
We agree to let God work it out.
We agree that we are at the same time saints and sinners.
We are all sinners before God and yet made righteous through Jesus Christ.

St. Paul tells us that there is no condemnation for those who know Jesus.
We know Jesus and because of this we become heirs to a wonderful promise.
A promise that says that no matter what God forgives and loves us.
I think we should be spreading that message wherever we can.
We should be helping others to know that even if they think they are the weeds God can make them into so much more.
God can make them into heirs, into a shining sun, into righteousness.
When we invite people into our community of faith we are not inviting people because they are perfect, but because we want them to know that they too are heirs of God’s promise.

We can never tell the weeds and wheat.
And we will never be able to pull the weeds out without also tearing out the wheat.
What we can do is tend to the Garden.
We can spread the good news of Jesus Christ that we are heirs to a wonderful promise and a great future.
Amen
Posted by Pastor Jonathan Hopkins at 6:37 AM