Fox And The Hen 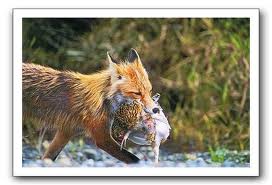 In a dark alley I would rather be the fox then the hen.
It seems as though a hen in those circumstances would have no chance.
A fox is the natural hunter of the hen.
It is the fox that is fast, has sharp teeth, and can kill a hen no problem.
And yet Jesus in today’s Gospel describes Herod as a fox, and himself as a hen.
Jesus concedes the power of this world to Herod, and admits that it will be the fox that eats the hen in the end and is still undeterred and unafraid.

Jesus is on his way to Jerusalem.
Jesus knows at this point that his time is nearing its end.
At this point there are many things that Jesus could do and one of them is turn around.
Go back to Galilee, preach there, become a famous Rabbi.
Jesus could be a rock star.
Instead he is choosing the life of a hen.

Perhaps for us all there is something here in Jesus’ story that will give us courage.
We all have fears that hold us back.
We all have fears that stop us in our tracks from living out our mission.
Perhaps it is simply that we feel like we might fail.
We feel like we are not good enough, strong enough, noble enough.
Perhaps we fear what might happen to us if we dare to risk loving someone who is unlovable.
And so instead of heading in a direction we stop, we turn around and head for safer ground.

Jesus might have been afraid.
In fact, I would like to think that he was.
That he really didn’t want to die.
Jesus believed perhaps foolishly that he could make one more appeal that God’s ways were better than the world’s ways.
That caring for the lost and outcast was better than military or economic security.
That religion was not as important as following God.
Perhaps once in Jerusalem he could teach the religious leaders what they had forgotten.
He could remind them of what the prophets had said.
But Jesus knew people well.
He knew what they thought and how they acted.
Jesus knew that people did not respond well to outsiders.
Jesus knew people did not respond well to people different than them.

One of my favorite movies is “Ground Hog Day” staring Bill Murray.
It is the story about a selfish weather man, who has to live the same day over and over, over, over again.
Eventually, this man learns what it means to give and to really live.
There is this one scene where he is trying to convince his producer that he is living the same day over and over.
They are in a diner.
He goes through every person in the diner and tells their life story.
She doesn’t believe it and accuses him of tricking her.
He says, “Maybe God’s not omnipotent. He's just been around so long he knows everything.”
I like to think about God this way.
God has been around so long, God has seen people throughout the ages, God just knows us and therefore God knows what we are going to do, and how we are going to act.
It is not that God doesn’t hold out hope that one day we will listen, that one day we will take the prophets seriously.
It is just that God knows that on a basic level we don’t want to know what Jesus has to say, or what the Prophets had to say.

The twenty-first century prophet Steven Colbert has said, “If this is going to be a Christian nation that doesn't help the poor, either we have to pretend that Jesus was just as selfish as we are, or we've got to acknowledge that He commanded us to love the poor and serve the needy without condition and then admit that we just don't want to do it.”

I always think that lent is a good time to admit that what we like about Christianity as practiced today is that it is often comfortable for us.
Lent is a good time to confess that our religion is more about our comfort than risking to help other.
Lent is a good time to confess that we don’t like the challenging part of Jesus.
We don’t like it anymore than Herod did.
Because Herod was fine with religion as long as it kept people in line.
But once it became something that made people want to change things, then it was dangerous.
This is why Jesus is dangerous to Herod.
And that is the fox in the hen house.
It is the fox that sets out to make us all feel that everything is fine.
And the fox who wants to stop us from taking a chance, from moving outside of our comfort zone.

Jesus knew people like Herod and the Sanhedrin did not like to give up their power.
He refused to be afraid.
Maybe more important he choose to rely on God.
Jesus knew that God’s plans, God’s future where more secure than anything else he could have been offered.
Are we sure?
Do we know that our lives are secure with God?
Do we honestly really believe that?
Do we believe it enough to put our lives in the hands of the hen in the alley way?
Do we believe it enough to actually live it?

My good friend Mindy works in a very poor school district as a school nurse.
She told this story the other day on her Facebook page about a ten year girl.
The girl came to the nurse’s office to ask if she could brush her teeth there in the mornings before school.
Mindy had some donated items from dentist in the area so she said, “of course.”
The girl came in the first day and Mindy gave her a toothbrush, small paper cup, and floss.
The girl asked for a paper bag to keep her things in.
When she left she returned the bag to Mindy.
In the bag were the cup and the floss.
She was going to use it again.
I will let Mindy’s words explain the significance of the story,
”When I hear what sounds like, "Judging" to me of people in poverty.
I cringe. I just think, "How can we judge their choices."
Maybe they are forced to do things against their moral beliefs?
I've seen the effects of poverty every day for 10 years and I still wouldn't claim to understand their world enough to judge what they have to do to survive.
Especially when everybody around them, family etc is also...just trying to survive.

Let me tell you....I've looked at floss a bit differently since that day.
Just makes you think........that world is incomprehensible.
As much as I think I might get it.....I don't.
I just can't get myself...to think I have any right to impose my thoughts on what they should and shouldn't be doing, when I know nothing about that world.
That's all.....check out your floss.
Ever even consider reusing that?”

Those are the words of a prophet.
They are the words that we often need to hear.
The words that challenge us to not be so comfortable with this world we take for granted.
Words that make us question whether or not it really is better to be the fox instead of the hen.

The next time you are afraid to take a chance and help someone in need think about how Jesus was unafraid to die for us.
Think about how Jesus was undeterred in his mission.
So the next time you are in a dark alley go with the hen don’t be afraid to put your life in the hands of the hen who desires to gather you under her wings.
Amen
Posted by Pastor Jonathan Hopkins at 8:01 AM