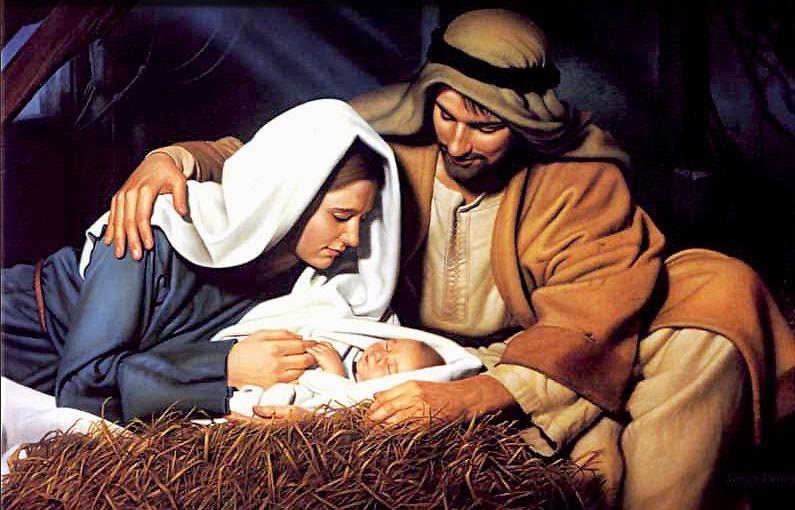 It was Friday afternoon and it was about to rain.
I was running around town getting ready for the men’s retreat I was going to lead that weekend.
When I came home my wife (Vicki) met me at the door and told me that I wouldn’t be going on the men’s retreat because she was in labor.
Hours later it was raining we were on the Long Island Expressway heading into Manhattan.
I was supposed to take the Queens Borough Bridge, but for some reason, I still can’t explain, I took the midtown tunnel in the middle of rush hour.
The Red Sox were supposed to play the New York Yankees that night in game three of the American League Championship series, and it got rained out.
On that night my daughter, Phoebe, was born.
That night changed my life forever.

Tonight we hear again the familiar birth story.
It is one that changed not just the lives of Mary and Joseph, but it changed the world.
It is the greatest story because in it we have seen the birth of God’s Son the Messiah.
As we heard sung in Phil and Joe’s duet, “he is mercies incarnation” and that is glorious and miraculous.
The parts of the story that we love are important because they tell us about what kind of God we worship and what kind of savior we have been sent.

It is no coincidence that the news first comes to shepherds, because we have a God that shows up in all lives.
And the news he brings changes those lives.
Certainly this story changed the life of the shepherds.
It gave them a glimpse into this wonderful miraculous thing that God was up to.
It gave the shepherds good news, it gave them great joy.
In this same way it changes our life too.
It brings Good News of great joy into our lives.
Life is not always filled with good news.
Some people are struggling this Christmas, maybe you are one of them.
Not everyone feels jolly and happy.
Let me suggest that in order to appreciate Christmas you don’t need to feel happy and jolly.
Feeling good is not what this story is about.
It is about hearing how God enter into the world and brought hope and love to all of us.

Part of Jesus birth story is about Mary and Joseph being forced by the Roman Empire to travel a long distance to be registered for a tax.
A couple of things about this part of the story, the Jewish people did not like being occupied by the Romans.
They didn’t like have to pay taxes to help the Roman Empire remain in power.
The shepherds in the field that night were probably not feeling very happy; they had to work at a difficult and hard job that did not pay very much.
Mary and Joseph were not rich, and had to spend the night in a stable.
These were not happy times or conditions that Jesus was born into.
But that is the point of the story that Jesus comes into our broken world and offers us salvation.
It is why we cherish it so much.

In 2004 the year Phoebe was born there was an unpopular war in Iraq, difficult economy, there were deadly hurricanes in Florida that year, the Abu Ghraib scandal was going public, and the Red Sox were about to go down 3 games to 0 in the ALCS.
It was a tough year, but really a year like most others.
For Vicki and me it is remembered as a year of great joy because we had become parents.
You see good news of God is not based on what is happening in our lives right now.
It is based on a promise that we believe in faith.
It is a promise that tells us, “no matter what our God loves and cares about us”.
Our God knows how vulnerable we are, because God experienced it when God became a baby in a manger.

You know that not all birth stories are happy.
I have had friends who have had difficulty getting pregnant, and others who have had complications during birth.
I have some friends that were unable to have children.
What can we say about these stories?
We can say that even into those situations God has brought good news of great joy for all people.
I think that is a significant phrase in the story that this good news is “for all people”.
It means even people who are not feeling the holiday spirit.

Just this week I had a woman come to my office looking for gas for her car?
She and her husband are living in their car.
As she was leaving I said, “Merry Christmas”.
She let out a huge wearied sigh.
I said, “But not in a fake way, but in a spiritual way, know that God is with you as you sleep in your car this Christmas”.
Jesus did not come in royal palace, or even a nice home, but in a feeding trough.
We can be merry not because of our station in life, but because we have a savior who knows our pain and suffering, and who is greater than our pain and suffering.

We love this story about Jesus birth.
It is an important world changing story.
It tells us a savior born in difficult times, appearing in an unlikely place, to unlikely people.
Most of all we rejoice tonight because Jesus has come into our stories and changed our lives forever. Merry Christmas!
Amen
Posted by Pastor Jonathan Hopkins at 5:24 PM