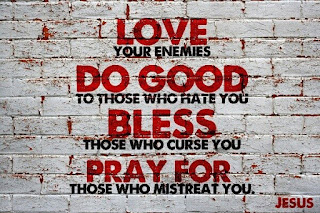 This past week I was not myself.
I was filled with such mixed feelings about the terror attacks in France, Beirut and Kenya that I was out of sorts.
I was talking to one member of our congregation who said that I just didn’t sound like me.
I was simply tired of terrorism.
I was tired of hearing about it on the news.
I was tired of it being something that is scaring us all the time.
I was thinking that perhaps we have to start wiping people off the face of the earth.
But more than that I was feeling despair about it.
And then on Thursday something happened that got me out of that funk.
I was at the board meeting for the New Hampshire Council of Churches.
And for devotions someone read from the Gospel of St. Luke, “But I say to you that listen, Love your enemies, do good to those who hate you, bless those who curse you, pray for those who abuse you.
If anyone strikes you on the cheek, offer the other also; and from anyone who takes away your coat do not withhold even your shirt.
Give to everyone who begs from you; and if anyone takes away your goods, do not ask for them again.
Do to others as you would have them do to you.
If you love those who love you, what credit is that to you?
For even sinners love those who love them.
If you do good to those who do good to you, what credit is that to you?
For even sinners do the same.”
Sometimes the exact right Bible passage comes to us at the exact right moment.
I was overtaken by Jesus’ words.
I was convicted and I was set free by them.
I had forgotten what is essential for Christians, to love in spite of hate, to hope in the face of despair.

And then I read a letter written by a husband whose wife had died in the attacks in Paris.
This husband wrote a letter to ISIS the people who killed his wife.
He wrote:
“Friday night, you took an exceptional life -- the love of my life, the mother of my son -- but you will not have my hatred.
I don't know who you are and I don't want to know, you are dead souls.
If this God, for whom you kill blindly, made us in his image, every bullet in the body of my wife would have been one more wound in his heart.
So, no, I will not grant you the gift of my hatred.
You're asking for it, but responding to hatred with anger is falling victim to the same ignorance that has made you what you are.
You want me to be scared, to view my countrymen with mistrust, to sacrifice my liberty for my security.
You lost.
I saw her this morning.
Finally, after nights and days of waiting.
She was just as beautiful as when she left on Friday night, just as beautiful as when I fell hopelessly in love over 12 years ago.
Of course I am devastated by this pain, I give you this little victory, but the pain will be short-lived.
I know that she will be with us every day and that we will find ourselves again in this paradise of free love to which you have no access.
We are just two, my son and me, but we are stronger than all the armies in the world.
I don't have any more time to devote to you, I have to join Melvil who is waking up from his nap.
He is barely 17-months-old.
He will eat his meals as usual, and then we are going to play as usual, and for his whole life this little boy will threaten you by being happy and free.
Because no, you will not have his hatred either.”

These two things brought me back to what Jesus tells Pilate this morning, “My kingdom is not of this world.”
Jesus is not saying that God’s kingdom is in some far off place away from here.
He is saying that the values of the world.
The values that Pilate rest in, the values of retribution, of hatred, of might makes right, of power that wants to rule over others.
Those values are not the values of the Kingdom of God.
In John’s Gospel the “world” is anything that is opposition to God.
It is the things that want us to strike out in our anger.
But Jesus always teaches us a new way.
In the beatitudes Jesus teaches us to love our enemies, to pray for them.
How many of us have prayed for ISIS?
How many of us have prayed that they might have a change of heart?
How many of us have prayed that we might have a change of heart?
I know what you are thinking that prayer is not going to do anything.
We cannot pray the crazy out of people.
But this husband, who wrote that letter, knows what we should know, that we only let people win if we give into our hate.
And for me this week it was only Jesus who could break through my hardness of heart.
It was God’s word that broke through to me to understand the power of love, the power of prayer, the power of things that other people in the world see as foolish and useless.

Truth is that ISIS is an extremist Muslimgroup that believes that we are living at the end times.
They believe that the area they have captured in Syria, Dabiq, is the place where the battle that brings about the end of the world is going to take place.
We are wrong to think that they only fight us because they don’t like our western values, although they don’t like them, they fight to hasten the day when the end will come.
We too wait for that time.
But we don’t believe that by controlling others we will bring it about.
We don’t believe that it comes by us killing people.
But more important is what Jesus told us that kingdom looks like.
It is a mustard seed, a women searching for a lost coin, a wedding banquet with uninvited guests, a small child.
It is found in values anathema to the world, forgiveness, gentleness, love, self-control, humility, poverty.
It is in the lost and forsaken.
It is in the least.
Most important that kingdom is here now.
It is here this morning amongst us, within us, around us.
God’s kingdom has come and it is present this morning as we break the bread and drink wine.
As we remember Jesus death and resurrection.
It is present as we kneel at this rail and ask for forgiveness.
We are not merely waiting for it to come.
Jesus has told us that it has come.
“The Kingdom of God has comes repent and believe in the good news.”
It has come because God so loved the world.
The world that is against God, that fights to make sure we don’t know what God wants from us.
A world, were people distort religion so they can kill others.
God loves that world and sent his Son so we might know how to live in the kingdom.
Church, today God is calling to us, God is asking us to be the kingdom of God.
God is calling us to live in the kingdom of God, and not just this morning, but everyday of our lives.
God is calling us to live in that kingdom outside of here regardless of what is happening in the world.
The response to this kingdom is reverence and awe.
To be overtaken with how God’s words of grace speak to us.
I know that I was in awe this week as I heard again the beatitudes from Luke’s Gospel.
It reminded me of what the psalmist says, “The Lord is king, robed in majesty!”

Even though we experience the kingdom it is not yet what it shall be.
It is not as perfect as it someday shall be.
And that kingdom will not look like this one.
There will be war no more; there will be no more violence, or tears.
There will only be love.
There will be a father and his 17 month old son robbed in God’s love, reunited with their mother and wife.
There will be us who shine like the son.

As we go back into the world filled with terror, with hatred, filled with opposition to God, let us live not in that world, but in the kingdom of God.
Let us live in God’s love that cast out hatred and violence.
So that we can imperfectly live in God’s kingdom now with reverence and awe, even as we wait for the kingdom come.
Amen

Posted by Pastor Jonathan Hopkins at 11:51 AM 2 comments: