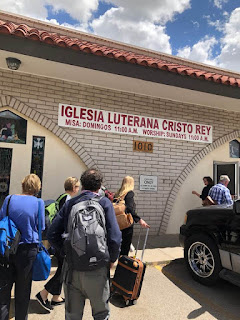 My sermon this morning needs some disclaimers.
The first is that I am going to be sharing a story about a family of undocumented people living in the United States.
I know that no matter what I say it will be seen by some as political.
However, I am asking you this morning to put politics aside.
Whatever your view on immigration to leave that at the door, and open your heart to hear this story.
Also, this story was shared with me as one Christian person to another.
I am sharing it with you in that same manner.
It is a sacred story, because it belongs to a child of God.
I am asking you to receive it in that manner this morning.
My sermon this morning is a bit different than most of my other ones, because it will revolve around this families story.
But I want you to know that this is what God put in my heart to preach to you this morning.
My hope is that you be touched as I was when I heard it.
I am aware however that it might not be possible because you are hearing it second hand from me.
I had the pleasure of hearing it firsthand.
So keeping all those things in mind I would like here is the story.

It started on Monday morning.
I woke up in the church that we stayed at for our border immersion experience.
It is a small church in the heart of El Paso Texas.
A good majority of the church makes only $10,000-$15,000 a year, most of the congregation is undocumented.
I was sleeping in the small sacristy area off the stage where the altar is.
I woke up and decided to look at the Gospel reading for this Sunday.
I read, "My sheep hear my voice and no one can snatch them out of my hand."
I realized later in the week that I had read the wrong Gospel, because this was last week's Gospel.
Our group was taken to what are Colonias.
It is a community where people bought some cheap land 20 or 30 years ago and then built small make shift houses on them.
We went to the house of Maria and Javier.
Maria makes Tamales and sells them to neighbors and others to provide some money for the family.
She provided lunch for us this day.
They live in a house meager house that they just moved into.
So Maria came to this country when she was 16.
She told us that after coming to the US was the first time that she heard about God.
And ever since then God has been her constant companion.
It has been God that she has trusted in to keep her and her family safe.
One thing we have to remember that there was a time when people moved freely between the border.
El Paso and Juarez were two cities that grew together and depended on one another.
It was during this time that Maria first came to the United States.
She met her husband Javier in Mexico.
The first time she saw him he thought he was the most handsome man in the world.
(I always thought I was...)
They fell in love and have three wonderful kids.
They wanted the best for their kids.
Mexico was becoming more and more dangerous and they settled in the US.
Then one day Javier went back to Mexico to see his dying mother and on the way back into the US was taken into custody and sent back to Mexico.
They didn't know what to do.
So Maria hired what is called a coyote.
Someone who helps people get across the border.
This is a dangerous thing to do.
It cost a good deal of money, and you don't know if the person you hire is honest or not.
And if you get caught you lose your money.
Maria would have never thought that she would hire a coyote.
But she did.
And Javier tried to get back into the United States to be with his wife and three kids.
He was captured and deported.
This happened two other times.
Maria would have other Christian groups come to her home, and they would all pray that the family would someday be together again.
But over time her prayer with these groups changed.
She began to pray that Javier would become invisible.
That the border patrol would not be able to see him.

One Sunday when she was in church doing the readings.
In through the door in the back appeared Javier.
He was dripping wet and smelled real bad.
He had to crawl through three sewers to get across.

He had found a Coyote who would help him for only $50.00.
The person told him when the guards changed so he could run from one sewer to the next without being seen.
As Javier waited in the last sewer a border patrol agent came to the sewer and looked in.
He looked right at Javier, but did not see him!
Maria's prayers had been answered.
She told us that it was only through God that her family was saved.

While she was telling us this story I kept thinking about the Bible verse I had heard that morning.
"My Sheep heard my voice and no one can snatch them out of my hands."
We belong to God.
All of us.
Maria and Javier are God's sheep and God was there to protect them.

I was really touched when hearing Maria and Javier story, more so than some of the other stories that we heard.
I was trying to think of why.
What was it about this story?
Later in the week while in prayer I realized what it was.

It made me think of my parents, and made me think of being a parent.
My parents sacrificed a great deal for me.
They have given me immeasurable gifts in my life.
Some of them financial, but mostly spiritual and psychological.
They gave of themselves so I could have a better life.
Isn't that what any parent would want?
Maria has told her children, "You keep dreaming and I will keep making Tamales."

I also thought about what I would do if I was Javier?
Would I break the law for my family?
And the answer is yes.
I would chop off my own arm for my wife and kids.
All those risks he took where for one purpose they were to get back to his family.
And they needed him.
Maria told us she didn't feel safe at night without Javier there for her and the kids, so she stayed up all night.

This is a story about a family.
It is about their faith in God's ability to do the impossible, make someone invisible.
If God can do that for me and you, and I hope that you believe that God does miracles for you, then God can do it for Maria and Javier.

Our Gospel this morning takes place right after Jesus has washed the feet of his disciples at the last supper.
Jesus reminds us that to be his followers means to love each other, by washing people's feet.
To be humble towards a world in pain, to see in each other a glimpse of the divine.
Rachel Held Evans is a Christian writer who died a couple of weeks ago at the age of 37.
In one of her books she wrote,  "I am tired of fighting, I am ready to start washing feet."

Because after all the votes are counted, after all the rhetoric is over, after all the anger is spilled, what do we have?
We have Jesus voice telling us to wash each other's feet.
We have the good shepherd who doesn't let his flock be taken.
We have a God bigger than our prejudices and fears.
We have stories of our pain, and our miracles.

We have Jesus Christ the poor man from Nazareth who died on a cross for Maria and Javier.
They taught me on my trip that this is all we really need to survive and thrive in this world.
They taught me that we all belong to God...no one can snatch us out of his hand, and that is time to start washing feet.
Amen.


Posted by Pastor Jonathan Hopkins at 9:24 AM No comments: