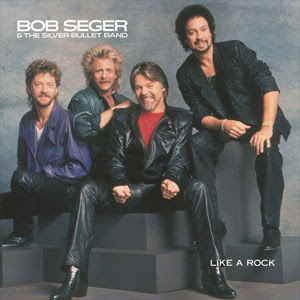 There are many signs that I am getting older. My hair is more grey, I have to wear glasses when I read, my hearing is not great (too many rock concerts), I can't stay up too late, I can't recover like I used to. One of the biggest for me is that I have been listening to Bob Seeger and liking it. My kids bought me a an old fashion boom box a couple of years ago. I keep it in the kitchen and listen to tapes while I cook (I have made a vow only to buy a couple of tapes for this purpose). I bought a used copy of Bob Seeger's tape "Like a Rock" (released in 1986). When I was 13 I would have never listened to this album. I knew Bob Seeger only from "old time Rock and Roll" that they played at Jr. High dances, and the Chevy truck commercials with the song "like a Rock". Bob Seeger was old person music. It was not cool or hip. It was no Aerosmith, Motley Crue, or AC/DC.

What I didn’t know is that the album is really about nostalgia. In fact, I have found out this is one of Bob Seeger favorite things to write about. The song, "Like a Rock" is not about trucks at all it is about wanting to be young. "I was eighteen/Didn't have a care/Working for peanuts/Not a dime to spare/But I was lean and Solid everywhere/Like a rock." The whole album is filled with song contemplating getting old and longing for easier more innocent times.

I have spent some time thinking about why this album is speaking to me as I turn 48. I have always worked hard at not being nostalgic for times gone by. I don't like it when people say that we grew up in a better time. That the music was better, the television was better, or the movies were better. I don't believe that. There is great music being made today, great movies, television. Even worse when people insinuate that the people were better, or that we are better people because we grew up when we did.  I didn't grow up in some idyllic time. I grew up when I did. It had its own good and bad, just like today. People were not more valiant or more moral. We had racism, bigotry, homophobia, and hatred. There is still greed and selfishness. We still are fighting against those things. So what is it that is making me attracted to this album about nostalgia?

I remember being in college senior year. I had this conversation with a friend about what will happen next. They were telling me how exciting it is that the world is open to us. That we could choice from an infinite amount of possibilities. I think it is that as I have gotten older the choices that I have made (both good and bad) are making life more set in place. There is less a sense that the future has limitless possibilities. There are more responsibilities. My life is not my own. I have to think how my choices will impact my family, the church I serve, the community I live in.

One of my favorite memories from college is when people from camp came to visit. We had a great weekend partying and doing things that young people do. On Sunday it was time for everyone to go home. However, the UCONN women's basketball team was about to win their first national championship. Everyone decided to stay. The game ended and everyone decided to stay longer. They left way later that night. We could do that then. There was nothing to go home to, no real responsibilities. The future was endless and not written.

This is not to say I don't love my life now. I have a life I never thought I would have. A calling I love. A beautiful, smart, dedicated, and hardworking wife. Two children who are smart and most important compassionate people that make me proud every day, and who I love so much sometimes it hurts. I live in a great city, close to my extended family, close to Camp Calumet. We live in a great house. I have been blessed beyond measure in my life. I wouldn't want to be 18 or 21 again.

So why the nostalgia? Why listen to songs with lyrics like, "Sometimes It goes so fast/I try to make some moment last/I watch it slipping past." As I thought more about that day at Muhlenberg when people stayed longer than they were going I think something else was going on. We didn't want it to end. We knew that moment was precious and fleeting. We wanted to linger as long as possible in the joy and good times. This is what nostalgia can teach us is to enjoy every day. Take more time to soak it in. And this is the lesson of turning 48, to enjoy every day and every moment. Because these times will someday be the past. Someday I will long for the days of driving two kids to and from school. I will long for the days of busy family schedules and a set life. I will look back and wish I had been more thankful and appreciated the moment. The character Andy Bernard in the office said, "I wish there was a way to know you're in the good old days before you've actually left them." At its best this is what nostalgia can do for us. It can remind us that every day is a gift. A gift to be lived to its fullest and appreciated for what it is. Because this day will never come again.

Here is my birthday playlist:

We All Have  (Feat. Matt Berninger)     Julie Stone

Posted by Pastor Jonathan Hopkins at 11:57 AM